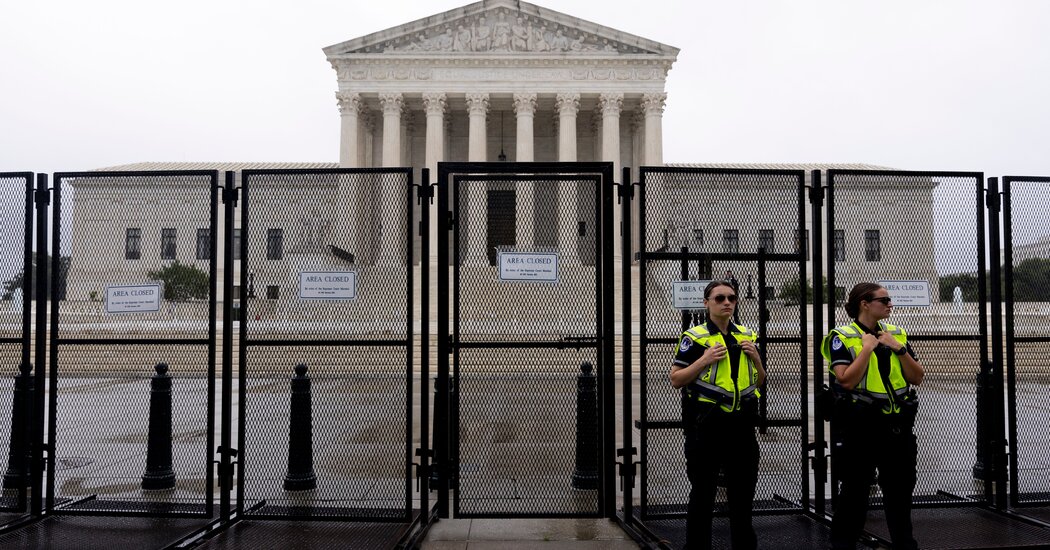 Good morning. It’s Friday. We’ll look at what the Legislature can do now that the Supreme Court has invalidated New York’s concealed-carry gun law. We’ll also look at how changing demographics are reflected in a House race in Manhattan.

In procedural terms, the Supreme Court decision striking down New York’s concealed-carry gun law sent the case back to lower courts. In practical terms, the decision sent the issue of gun control and gun violence to lawmakers in Albany, where Gov. Kathy Hochul called the ruling “shocking, absolutely shocking.”

She was preparing to sign a school safety bill when the Supreme Court decision was announced and became visibly angry as she described the 6-to-3 ruling, which was built on a broad interpretation of the Second Amendment that is likely to make it harder for states to restrict guns. Hochul said she would call the Legislature back to Albany for a special session, probably next month, and that aides had already prepared draft legislation with new restrictions.

She also said the state was considering changing the permitting process to create basic qualifications for gun owners, including training requirements. And she said New York was considering a system where businesses and private property owners could set their own restrictions on firearms.

In New York City, Mayor Eric Adams said the decision was “just not rooted in reality” and “has made every single one of us less safe from gun violence.”

“There is no place in the nation that this decision affects as much as New York City,” he said.

But the question of the day was what the Legislature in Albany could do.

He suggested setting an age threshold for gun permits, much like the ones for drivers’ licenses, and taxing firearms, much like gasoline or cigarettes.

Vincent Bonventre, a professor at the Albany Law School, said the Legislature could restrict the possession of firearms by categories, putting guns out of the reach of convicted felons or people convicted of misdemeanors involving violence, for example. “It’s going to take some thought” to develop restrictions that would pass muster, “but not that much,” he said.

Jonathan Lowy, the chief counsel of the gun control group Brady, has argued that letting more people carry hidden handguns would mean more violent crime — “in other words, more Americans will die,” he wrote in the New York University Law Review last year. On Thursday, the group estimated that more than 28,000 people had died from gun violence since the case was argued before the court last Nov. 3.

Among those shot was Zaire Goodman, 21, who survived the May 14 supermarket massacre in Buffalo, N.Y. On Thursday his mother, Zeneta Everhart, said she feared the Supreme Court decision would contribute to more gun violence.

“What else has to happen before this country wakes up and understands that the people in this country don’t feel safe?” she asked. “The government, the courts, the lawmakers — they are here to protect us, and I don’t feel protected.”

In effect until July 4 (Independence Day).

As recently as the 1990s, about half of the lawmakers whom New York City voters sent to the House of Representatives were Jewish. Now there is one, Representative Jerrold Nadler, and he is fighting for political survival because his district was combined with parts of Representative Carolyn Maloney’s on the Upper East Side. She’s running against him in the Aug. 23 primary. (That’s the right date. The congressional primaries are not being held next Tuesday with the primaries for statewide offices like governor and lieutenant governor. A federal judge ordered the House primaries delayed after the congressional districts were redrawn.)

New York was long the center of Jewish political power in the United States. As recently as the 1990s, lawmakers who were Jewish made up about half of New York City’s delegation in the House of Representatives. What changed?

It’s a complicated story, but it largely boils down to demographic change. New York’s Jewish population peaked in the 1950s, when one in four New Yorkers were Jewish. Today, there are about half as many Jewish residents in the city, and they tend to vote less cohesively than they once did. The exceptions are growing ultra-Orthodox communities, primarily in Brooklyn.

Redistricting over the years has really reinforced this pattern.

At the same time, New Yorkers of Black, Latino and Asian heritage have been gaining seats at the table that they historically did not have. So where in the early ’90s, eight New York City House members were Jewish, today nine of the 13 members representing parts of the city are Black or Latino, and another is Asian American.

How did redistricting help Nadler in the past, and what happened this time around?

Nadler’s current district was that way by design. Mapmakers in the past intentionally stitched together Jewish communities on the West Side of Manhattan with growing Orthodox ones in Brooklyn’s Borough Park, sometimes going to great lengths to connect them.

But this year, a court-appointed mapmaker severed the connection. The mapmaker, it seems, was not persuaded that the communities shared enough interests to remain connected in such a geographically counterintuitive way.

What about Nadler’s opponent in the primary, Representative Carolyn Maloney. She’s a Presbyterian running in what’s believed to be the most Jewish district in the country.

Maloney is competing hard for the Jewish vote. She has been racking up endorsements. On the campaign trail, she touts a bill she’s passed on Holocaust education and her opposition to President Obama’s Iran nuclear deal, which Israel’s government vehemently opposed at the time. (Nadler supported the deal.)

What about pro-Israel political groups? Which one are they backing, Nadler or Maloney?

So far, the American Israel Public Affairs Committee, which has been quite active in Democratic primaries this year, is staying neutral, or supporting both candidates actually. J Street, the pro-Israel lobby that tries to be a liberal counterweight to AIPAC, is raising money for Nadler.

It was 1950. My grandmother would pick me up after school on Seventh Street near Avenue B and take me for ice cream and a pretzel rod or some other treat.

On this particular day, she said we were going to the Second Avenue Griddle, my favorite place for jelly doughnuts. They were topped with crunchy sugar. You could bite into them anywhere, and real raspberry jam would ooze onto your fingertips.

I could hardly contain my excitement as we walked the three long avenue blocks to Second Avenue. We walked into the store, and the counterman handed me a doughnut in wax paper. I bit into it and immediately had jelly all over my face. I was in doughnut heaven.

The counterman motioned for me to come behind the counter. He pointed to a tray of freshly baked doughnuts and handed me a clean white apron that hung to my ankles. Then he handed me a doughnut in wax paper and showed me how to glide it onto the nozzle of the jelly machine.

With my free hand, I was to push the handle of the machine slowly down so the jelly streamed into the doughnut without shooting out the other side. I became proficient enough to move things along, and soon all the doughnuts were filled.

I washed my hands and handed the apron back when I was finished. My grandmother and I left for home.

“Your Uncle Lenny must love you very much,” she said as we were walking. “If the owner of the store had come in, he would have been in a lot of trouble.”

Glad we could get together here. See you on Monday. — J.B.

P.S. Here’s today’s Mini Crossword and Spelling Bee. You can find all our puzzles here.

Sign up here to get this newsletter in your inbox.